BioProcess International (BPI), a Media Partner of the Pharma & Biopharma Outsourcing Association, announced the winners for its 2014 BioProcess International Awards. The awards celebrate the outstanding achievements, collaborations, business strategies, social corporate responsibility and technology applications that will allow the industry to deliver better, more effective treatments to a global patient base. 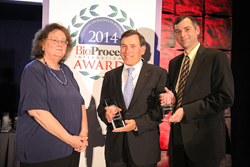 Winners and finalists were honored and recognized by their peers during an exciting awards dinner and ceremony yesterday evening, October 22 at the Hynes Convention Center in Boston. The event coincided with the annual BioProcess International Conference & Exhibition, which is held by IBC Life Sciences.

The award for Excellence in Facility Design or Retrofit went to PBOA Founding Member Gallus Biopharmaceuticals and GE Healthcare Life Sciences. Gallup also won the award for Downstream: Best Technology Applications, along with Natrix Separations, Inc. for their Natrix HD Membranes. Other winners include

The next BioProcess International Conference & Exhibition will be at the Hynes Convention Center in Boston from October 26 to 29, 2015.

The PBOA will offer a broad array of resources to its members, affiliates and the industry at large.

JOIN TODAY
Interested in joining the Pharma & Biopharma Outsourcing Association? Fill out and submit the form below and we’ll contact you right away: